Our two-actor show "TheaterMakers" was originally created for grade school assemblies, but it's a hit for parties, too!  Parents around the neighborhood will be impressed with your selection of a quality show that teaches literacy, performing arts, and communication skills -- while the kids are having a great time!

After a musical introduction and a fun little play, we begin introducing improvisation to the kids -- a great way to encourage imagination and storytelling.  The children get to control the action on stage.  A rare treat for youngsters to be able to control adults!

Then we get several of them up playing with us in a theatre adventure (involving a king or queen, a wizard, and a quest).  The scene is created before their very eyes and they get some say in where the story goes. 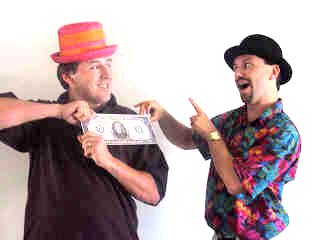 We use this story to show how the queen made better choices with her words than the wizard, who tries to use force.  This is our transition to "The Four Magic Steps" (adapted with permission from the Center for Non-Violent Communication) where we learn a clever technique anyone can use to express feelings and make a request in a respectful and productive way.

"You guys are too funny!" we were recently told by a qualified nine-year-old theatre critic. 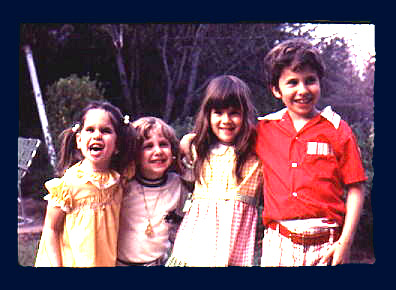 ...our students of all ages learned how to tell a story using theater, theater terms, improvisation and conflict resolution strategies with the 'Four Magic Steps.'

Weeks later, our students continued to refer to the 'Four Magic Steps' to communicate with each other and resolve potentially problematic situations. "
-- Krista Hahn, psychologist, Creekside Elementary School in Poway, Calif.